Advocating for our patients in the #MeToo era

The burden of fighting the culture of sexual violence does not and can not lie solely on survivors. It must include the voices of physicians. The 2018 Nobel Peace prize awardees offer a beautiful example of this dual effort. Denis Mukwege, M.D., PhD., and activist Nadia Murad -- herself a survivor -- were both recognized for their efforts to end the use of sexual violence as a weapon of war.

Three years ago, I started what you might call a #MeToo family medicine clinic. The PurpLE Clinic at the Institute for Family Health in New York City was designed for people who have experienced sexual trauma, including sexual assault, domestic violence and sex trafficking. Every concern from the outside world, from “Why didn’t she report it?” to “What if she’s lying?” can be answered by stepping inside the clinic. And yet, when I leave the confines of the medical space, I see these questions stubbornly fester in public discourse; exploiting the silence and circumstances of sexual trauma survivors. As a doctor, I am compelled to counter the harmful misconceptions regarding sexual violence and trauma with truths that I have learned from clinical practice. Here are a few:

My clinical exam room is a graveyard of smashed stereotypes of what some people think victims “should be” -- a distressed individual who provides a linear story with a desire to report the assault immediately. 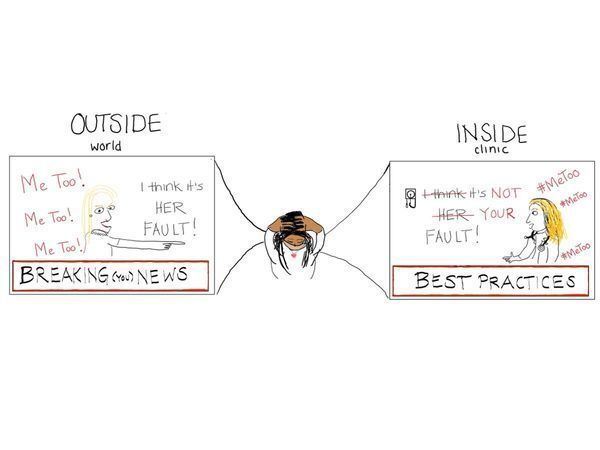 As physicians, our responsibility to counter rape culture is not simply to share stories, but to share how our patients share their stories. We must lend credence to the unexpected smiles, inevitable gaps in memory, and nonlinear information that is normal in trauma.

The first sexual assault exam I ever did was with a teenage girl. She had never had a speculum exam. I asked if anything would make her feel more comfortable. She turned on her iTunes, and we started her exam with music blaring in the background. She had come in with her best friend. They laughed and giggled together. Her assault had occurred just seven hours earlier.

That is trauma. Our public awareness must evolve to understand trauma’s permutations so survivors are not wrongly scrutinized.

“But they looked so happy” is a common reaction when people learn that someone they know was in an abusive relationship. There are pictures seen by the outside world — images of a healthy, loving relationship, beautifully curated and filtered photos on Facebook and Instagram.

And then there are the photos I take in clinic. Smiles to the external world are irrelevant in the confines of the exam room.

Every time I meet someone who has experienced a recent sexual assault or domestic violence, I ask two questions: “Do you plan to file a police report?” and “Would you like photos of the injuries in your medical record?” The answer is almost always “No” to the first and “Yes” to the second.

Photographing injuries remains a particularly unnatural and emotionally challenging part of my work. The silence during the 10-second process of setting up the camera always grows uncomfortably large. Sometimes she helps hold the ruler, noting my clumsy efforts to measure the injury while photographing. I press the button. And then I move to the next one. I hope that this process will never feel normal. And I hope that our public consciousness evolves to understand that the presence of happy pictures does not imply an absence of trauma. 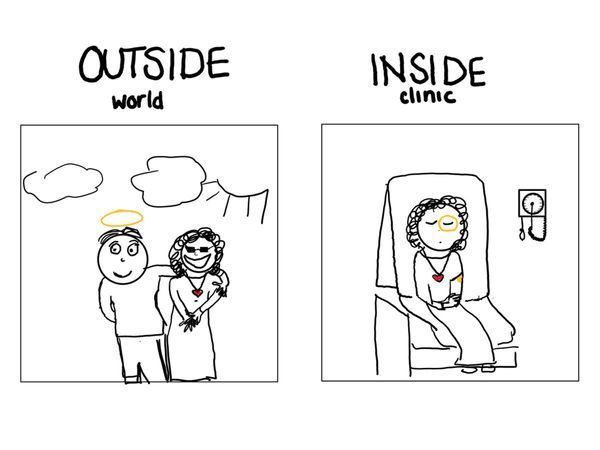 Sexual assault is the abuse of power. It can be power based on many factors: gender, race, sexuality, immigration status, literacy, mental health, and on and on. When an accused person lists an illustrious résumé, it tells me about their positions of power but it does not tell me the responsibility with which they wield it. Being educated or wealthy is not a prophylactic against perpetrating violence. People in highly esteemed positions of power have hurt my patients. It’s a common reason that people don’t report the crime. In cases of sexual assault, résumés are not needed.

Résumés are also often used to highlight the harm to those who are accused of sexual assault. What if it’s not true? A person’s hard-earned standing in the world has been ruined. Look at what they’ve lost.

I wish this remarkable empathy could be applied in understanding the loss that comes with sexual assault. But it’s harder to quantify the loss of opportunities that were never actualized. In medicine, we are taught about “insensible losses” — the loss of fluids from our body that can neither be perceived nor measured directly but are critical to account for. Some sexual assault survivors experience a form of insensible loss on their résumés. The invasion of post-traumatic stress disorder, depression, and anxiety following sexual assault can result in life-altering changes that impact career trajectories. These are financial, physical, and emotional losses that are masked by survivors’ resilience.

When asked about their dream job, my patients commonly respond, “I used to want to be X, but now I’d rather be Y.” X has included becoming a business owner, social worker, or health professional, while Y has frequently included wanting to be a mortician or custodial worker — something quieter “where no one harasses you or tells you, ‘Your ass looks nice.’” These résumé changes often go undetected during the “inconvenience” of sexual assault accusation discussions but it’s time for them to be accounted for and acted on in our collective response to sexual violence. 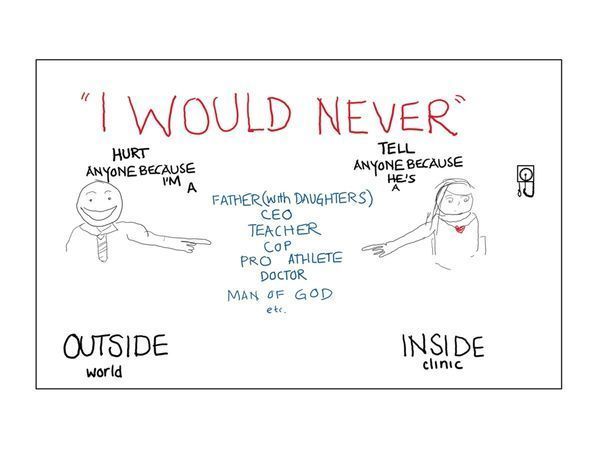 As each day of clinic wraps up and I step from inside to outside, two truths stubbornly, persistently demand my attention on my walk home: sexual violence is a cultural infection and adding physician voices is necessary for its eradication. Physicians bear witness to the patterns of stories that deserve to influence policies, but may never be heard. The shared work of survivors and physician-allies is necessary to change our culture and to secure a future immune to sexual violence.